Skip to content
These dinosaurs are only known from material that cannot be used to determine taxa, so are officially unnamed, unless stated otherwise…

This dinosaur, unofficially known as “Angloposeidon”, is known from a single cervical vertebra, which measures somewhere in the region of 75cm in length, and is relatively complete though it is partially crushed. There is enough present, however, to assign it to the Brachiosauridae, with many similarities with the North American genus Sauroposeidon, although there is enough differences to determine it as a new taxon, although there is a chance it may belong to one of the already known brachiosaurids from the Isle of Wight.

This represents the largest known brachiosaurid vertebra known from Europe, and is similar in scale to Giraffotitan from Tanzania, Africa. This would make the entire animal somewhere in the region of 20 metres in length.

The specimen, MIWG 7306, is currently on display at Dinosaur Isle.

Known from some partial pubic bones and a femoral fragment, this theropod has just enough material for it to be identified as being different to all the other theropod dinosaurs known from the Isle of Wight. It appears to be a basal tetanuran or indeterminate classification, although it is not a coelurosaur (see below)

The pubes curve gently backwards, the two medial flanges of which form an apron (in other words, bony shelves project inwards from the inner surfaces of both pubic shafts) that is separated for about half of its length by a long slit. A blunt pubic boot, consisting of the conjoined ends of both pubes, is present. The projecting anterior part is missing, but its posterior part is wide and tapers less than the pubic boots of coelurosaurs. the halves of the pubic boot are not fully joined, suggesting this was not a fully grown specimen, even though via comparison with similar theropods, that this dinosaur would have been just over 5 metres in length!

The femur fragment consists of the distal end. Both condyles are preserved, as is a deep extensor groove on the fragment’s anterior surface

Sauropod dinosaur, known from a well-preserved chevron (V-shaped bone attached to the ventral surface of caudal vertebrae, sometimes called haemal arches), with fragile plate-like anterior process and less pronounced dorsal process, was found near Grange Chine in 1975. Although similar to Diplodocus, the midline slit is shorter and narrower, so may belong to a dicraeosaurid. However, the ‘sled-like’ morphology supporting a diplodocoid assignation is now thought to have been primitive for neosauropods, rather than derived, so may not be a diplodocoid at all

A sauropod dinosaur, known from isolated teeth and an incomplete scapular, which displays the extreme dorsoventral expansion of the scapular blade and the “hook”-like acromial process that are characteristic of rebbachisaurids, a wide-mouthed group of sauropod dinosaurs.

There is also an anterior caudal vertebra , which possesses several features known only in rebbachisaurids including development of triangular lateral processes and the presence of an elliptical fossa on the lateral surface, bounded by the lateral lamina and postspinal rugosity. The Isle of Wight specimen also has a hyposphenal ridge, as well as an anteriorly excavated caudal rib that is restricted almost entirely to the neural arch. However, it differs from the similar spanish genera Demandasaurus in a number of ways, including the lack of excavation on the posterior surface of the caudal rib, the orientation of the neural spine, and the composition and morphology of the lateral lamina. In addition, the Isle of Wight vertebra possesses one potential autapomorphy: bifurcation of the elliptical fossa on the neural spine. 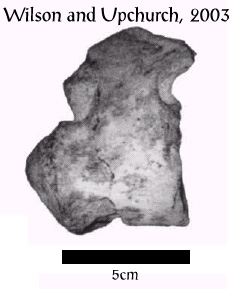 The only ?’Titanosaurus’ (gigantic lizard) specimen is an isolated anterior caudal vertebra from the distal half of the tail, which was, unusually for an Isle of Wight dinosaur, found in the Upper Greensand.

The vertebra consists of a centrum, which is strongly procoelous and may have had transverse processes, indicated by broken ridge-like areas close to the top, has a slight transverse compression and convex dorsoventral lateral surfaces that merge smoothly into the ventral surface. There is no ventral excavation, and there is an absence of ventrolateral ridges. There is no horizontal ridge at the neurocentral junction, and the base of each prezygapophysis is preserved, although little detail can be seen. There is also a partial neural arch.

Although this appears to be to a titanosaur, there are no distinguishing features that diagnose it as any specific genus.

The presence of dromaeosaurs in the Wessex fauna has been predicted for some time based on the known palaeobiogeographical distribution of this group of dinosaurs. However, until 2003 their remains had not been recognized. During the course of work on the microvertebrate fauna of the Wessex Formation, Island resident and research palaeontologist Steve Sweetman identified a number of teeth in his collection (one of which he found in 1972) that are attributable to velociraptorine dromaeosaurs. A search of other local collections revealed three further specimens bringing the total to seven. The specimens have been donated to the collections of the Isle of Wight Museum Service.

The largest of the teeth are similar in size to the teeth of the dromaeosaurine dromaeosaur Utahraptor, from the Cedar Mountain Formation of Utah, which is the same age as the Wessex Formation of the Isle of Wight. It is possible therefore that the Isle of Wight velociraptorine dromaeosaur could have been of similar size to Utahraptor, making it the largest velociraptorine yet discovered. Uncertainty concerning the number of taxa represented by the specimens and other considerations have prevented the naming of a taxon based on the teeth but they do represent the first unequivocal record of dromaeosaurs in the Wessex Formation, although Ornithodesmus is most probably a dromaeosaur too, but that assignation is debatable.