Simon M. Clabby (BSc (Hons), MSc) is a palaeontological writer, with works published in France, Mexico and his native England. He has done consultation work for the EarthSim project, and assisted with the preparation, replication and demonstration of Thecodontosaurus bones for the Bristol Dinosaur Project, working with the University of Bristol, the @t Bristol science centre and Rockwatch, part of the Geologist’s Association.

Simon’s area of expertise is dinosaurs from the Wessex Formation of the Isle of Wight, an Early Cretaceous site containing many unique specimens, and has both advised and written on the subject, as well as delivered lectures to varied audiences across southern England.

His interest in dinosaurs started in primary school, with a reading of the children’s book “Megs Eggs”, which features dinosaurs hatching from eggs and ravaging a witch’s garden. From then, he was hooked, watching documentaries, movies, and pestering his parents until visits were made to the Natural History Museum, London and other dinosaur attractions around the UK

Later, he went on to study Palaeobiology at the University of Portsmouth, England, which he then supplemented with a Masters degree in Palaeobiology at the University of Bristol, England. After leaving these prestigious institutions, he went on to assist with the creation of an artificial intelligence-based computer simulation of Early Cretaceous Utah for Qube Software Ltd.

Simon devoted most of his time to maintaining DinoWight, which managed to get many exclusives about Isle of Wight discoveries long before they hit the national and international press, such as the naming of the pterosaur Caulkicephalus and the discovery of a sauropod 25 metres long, the largest known from Europe!

He lives in Portsmouth with his wife Hannah, his favourite dinosaur is Iguanodon and his hobbies include fossil hunting (obviously), LEGO and model making. His greatest accomplishment in the field of palaeontology was becoming the third person, but first non-Russian speaker, to find a trilobite in a quarry in Päri, Estonia, where trilobites are rarer than Polacanthus skeletons. His life ambitions are to discover a new species of dinosaur and to see a badger.He spends most of his time pretending to be a dead dog on twitter for the Mary Rose Museum, where he is the Digital Marketing Co-ordinator, a job he got through creating this website. 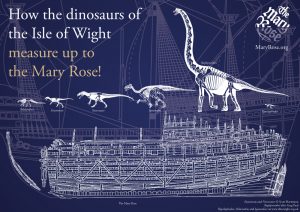 Although it’s not palaeontology, he does try to sneak it in now and again…

His favourite dinosaur films are “Jurassic Park” (Universal Studios), “King Kong” (RKO) and “One of Our Dinosaurs is Missing!” (Disney).”